In an article published by Law360 on February 17, 2022, Peter Spanos discusses the U.S. Court of Appeals for the Eleventh Circuit's Jan. 19 decision in Towns v. Directors Guild of America Inc. The decision demonstrates that Georgia's "right-to-work" law can fail to protect workers from union control over access to employment.

"In accordance with well-established law, the appeals court upheld the district court's ruling that his state law claims were preempted," said Spanos.

The parties to the case were Marvin Towns, an African American man who worked in film production for decades, but not in Georgia, and the Directors Guild of America.

Towns sued the Directors Guild and the production company in the U.S. District Court for the Northern District of Georgia, asserting claims under Georgia's right-to-work statute and state law claims for tortious interference with a contractual relationship, failure to act in good faith and negligence for not including him in the third area qualification list. Towns did not include a claim against the Directors Guild for breach of its duty to fairly represent him as a member of the union.

Town's failure to establish his right to employment in his profession in Georgia resulted from the defects in his legal pleadings and his choice of remedies.

"For that reason, Towns v. Directors Guild primarily serves as a cautionary example of the perils of poor choices in litigation, particularly the perils of belated claims raised first on appeal," noted Spanos. 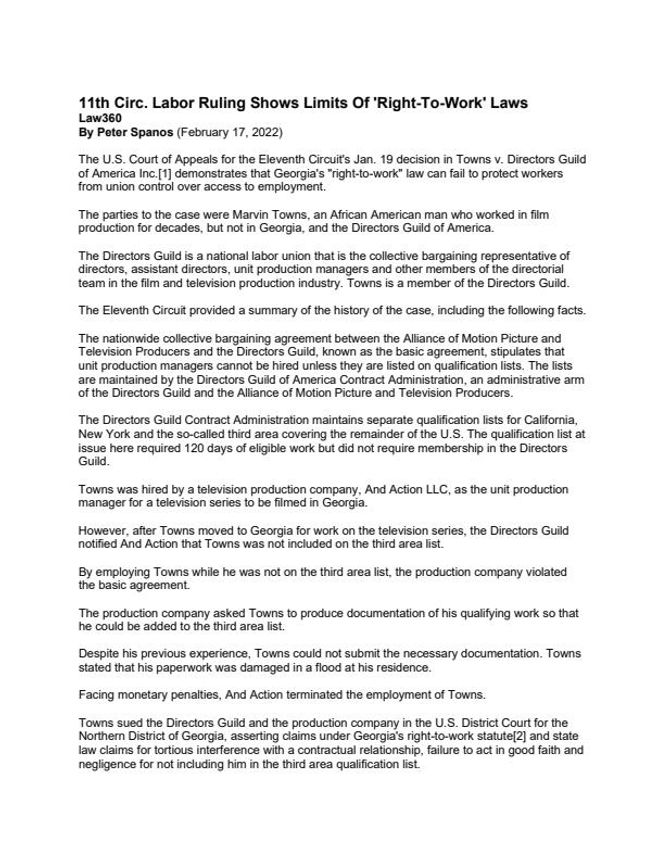