Federal Court Rules LBC is a Security: The Howey Test is Alive and Well

A federal court in New Hampshire has ruled in the SEC's lawsuit against LBRY, Inc. that its LBC crypto-token is a "security" for purposes of the Securities Act of 1933.

District Court judge Paul J. Barbadoro ruled in Securities and Exchange Commission v. LBRY, Inc. (D. NH - Case No 21-cv-260-PB) that LBRY's offering of the LBC token in a series of transactions was an offering of a security without an active registration.  The Securities Act of 1933 prohibits public offerings of securities unless those securities are registered with the SEC or able to utilize and exemption under the 1933 Act.

In reaching this conclusion, the court applied the Howey test which holds that an "investment contract" is a security for purposes of the 1933 Act if it involves "(1) the investment of money (2) in a common enterprise (3) with an expectation of profits to be derived sole from the efforts of the promoter or a third party."

The court reasoned that there was no question as to the first two prongs of the test and the only question was whether investors in the LBC tokens expected to derive a profit from the entrepreneurial or managerial efforts of the LBRY promoters or managers.

In its decision, the court reviewed evidence that the LBRY promoters and managers had spoken extensively to investors about their plans for LBRY, the software platform they were building, and how the LBC tokens would appreciate in value if they were successful in launching their platform and encouraging its acceptance in the marketplace.

The court concluded that "these statements are representative of LBRY's overall messaging about the growth potential for LBC, and thus the SEC is correct that potential investors would understand that LBRY was pitching a speculative value proposition for its digital token.  LBRY's messaging amounts to precisely the "not-very-subtle form of economic inducement" the First Circuit identified [in another case] as evidencing Howey's "expectation of profits.""  [Opinion, p.14]

The decision is a win for the SEC and a warning signal for investors and entrepreneurs in the crypto space.  The Howey decision is alive and well and promoters of crypto tokens need to analyze their offerings against the available case law to determine whether they need to structuring their offerings with a view towards 1933 Act compliance.

The court concluded that "these statements are representative of LBRY's overall messaging about the growth potential for LBC, and thus the SEC is correct that potential investors would understand that LBRY was pitching a speculative value proposition for its digital token." 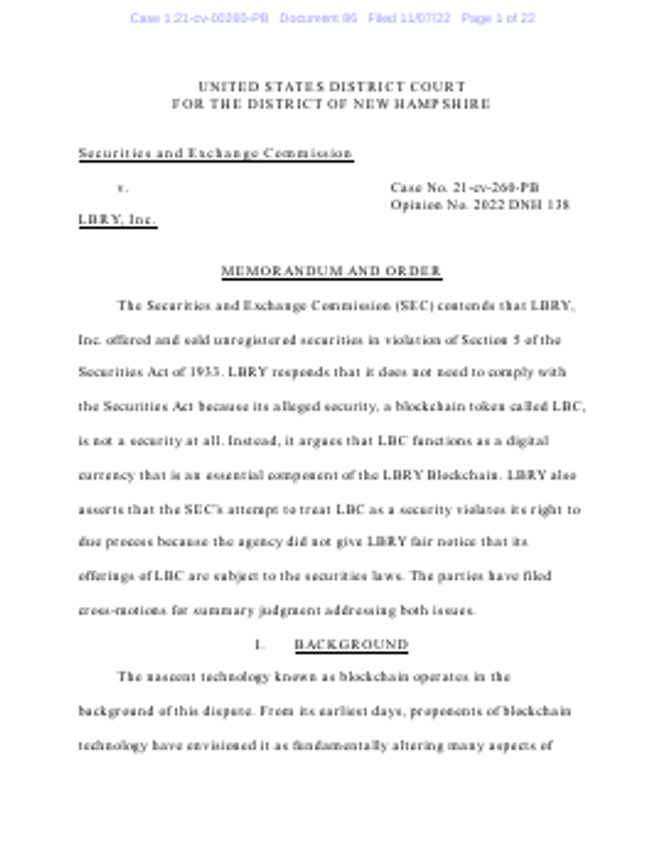